I've recently had the opportunity to reorganise my Flintloque collection, partly due to some nicely discounted plastic storage I was able to buy, and also because of a new 'do something with it or sell it' policy I've adopted. It has got to the point where I just don't have the space or time to devote to projects I am not really that interested in, so I have decided to be firmer with myself. I'm going to work through my projects and ask myself if I would be happy painting something for it right now. If I wouldn't then I clearly don't have much love for it and it needs to go. Fortunately, the Flintloque range doesn't fall into this category, so I have been able to paint a few more commanders to play a game or two of Black Powder.

As a big fan of the Flintloque miniatures and the Black Powder rules, I have wanted to combine the two for a while now and have been working on the stats for the various armies. As the setting is very similar to history, most troop types can be taken from the Albion Triumphant supplements, with a few adjustments to account for the more 'fantasy' elements. I plan to eventually put all of this together in a PDF, but it is still early days and I need to play a few games first.


I have put together two armies using what I have got painted at this time, with plans to add more to this when I can. Due to space, I am halving all measurements and the figures in each unit. As such, infantry will be 12 figures and cavalry 6 as standard. I am using sabot bases holding 4 infantry or 2 cavalry with 3 of these bases making up a unit.

For the Ferach army I was able to muster two brigades of elves and another of Todoroni.

All commanders had a rating of 8, except the Todoroni, who had a pitiful rating of 6. Moving unreliable militia would be a real challenge!

The Orcs can only muster two brigades, but they are hardy fellows and will no doubt be keen to test their mettle against their hated foes.


For a first try I wanted to keep the scenario simple, so it was a simple case that the Albion brigades has become separated from the rest of the army and were awaiting a relief force. The Ferach General saw an opportunity to crush part of his hated enemy's force and dispatched a force to do so.

The Orcs have tried to find a defensive position and just need to hold tight while fending off the enemy.

The Ferach advanced steadily, the attack columns covered by skirmishers. On the right flank the Heavy cavalry were sent forward to outflank the artillery and distract the enemy. As was to be expected, the Todoroni Militia refused to move, so the C-in-C was forced to intervene. But by that point the attack columns had pushed forward, so the use of the Todoroni as a shield was basically negated!


Sensibly, the majority of the Albion force held their positions, although the Rifle Orcs were sent forward to harass the enemy and the Orc Line on the right flank edged forward to try and engage a little sooner.

On the right flank the Ogres tried to move to react to the cavalry, but all they managed to do was form a column. By that point the cavalry had reached the flank, so they reformed to face them.

On the left one of the Ferach battalions formed line to open fire on the Rifle Orcs as Todoroni watched on... The other battalion continued to advance behind the light infantry.


On the right, the advance was more coherent!

A little while later the Ferach on the left charged home and entered into a bloody melee with the Orcs. Unfortunately the line they contacted was not the one that had previously suffered under fire from the skirmishers and so was fresh! Both sides ended up being disordered and with two hits. The Orcs should really have been softened up a bit first, but you live and learn. It could still go either way.


Regrettably the C-in-C decided to try and move the Todoroni militia and failed. Unfortunately I made an error at this point and played as though a failed C-in-C order would end the turn. This only happens on a blunder. I think I confused this with the old Warmaster rules...

Following the first melee of the game, things started to pick up a little. On the left, the bloody combat ensued with no side gaining a clear advantage.

Unfortunately, this led to a situation where both sides had to make a Break Test, which they both promptly failed, leaving a gaping hole in the battlefield! 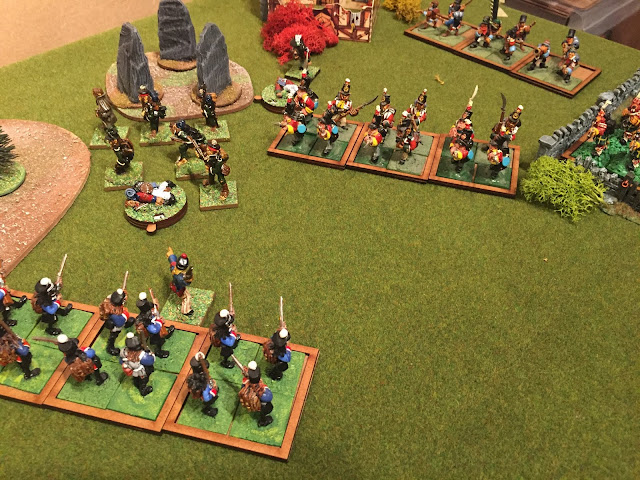 The next couple of turns also saw commanders do their best to rally worn battalions before throwing them back into the fray.

The first blunder of the game was unleashed when the Ferach C-in-C attempted to chivvy the Todoroni into the newly created gap. In typical fashion they interpreted this as an order to retreat!


On the right of the battlefield the Ferach commander grows tired of waiting and throws his men forward into melee. Possibly not the wisest of decisions as the Joccians are well supported on each side and are also behind cover...


The Ferach Heavy Cavalry floundered about, mostly as they had really been given the job of Light Cavalry. Without the Marauder special rule it became much harder to get them to move in a timely fashion and it was a struggle to get them to even form line!


What's more, fire from the ogres caused disorder, delaying the cavalry even more. Fortunately, the melee against the Joccians proved decisive, and also eliminated an Orc commander, opening up a path to the Ogre's flank.

The tall fellows stood firm despite the casualties. Unfortunately for the Elves, disorder counters were really hindering their opportunities to advance as they wished. I can see why some players might want to adjust that rule, but I think it does just add another layer of interesting difficulty!

Finally, after much cajoling, the Todoroni militia were coerced into forming a battle line alongside the elves, not that they would prove to be much use... But a gap filled is better than one left open!

On the right, the Ogres were mercilessly crushed by the attack column at their front and the heavy cavalry to the rear.

Responding to the danger, the Goblins were ordered to protect the flank of the Joccians, but would it be too late? 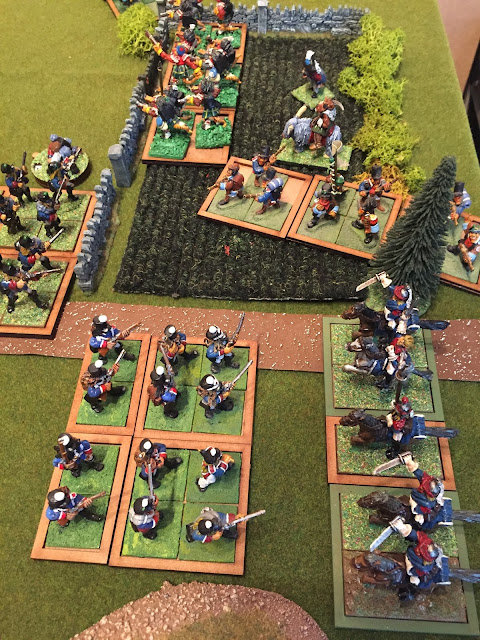 The Ferach line held firm and, although it took a couple of turns, the light cannon was brought forward in an attempt to add some additional firepower. 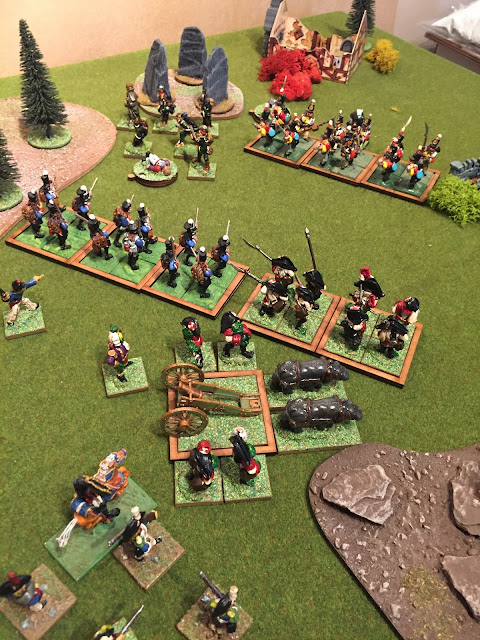 Unfortunately, between the melee with the Ogres and the pressure of fire from the Joccians and Goblins, the Ferach battalions found themselves shaken and vulnerable. It was deemed that a withdrawal was in order, although the cavalry did pause to ride down the Albion gun positioned on the hill.

At the end of the turn the battlefield looked like the picture below. 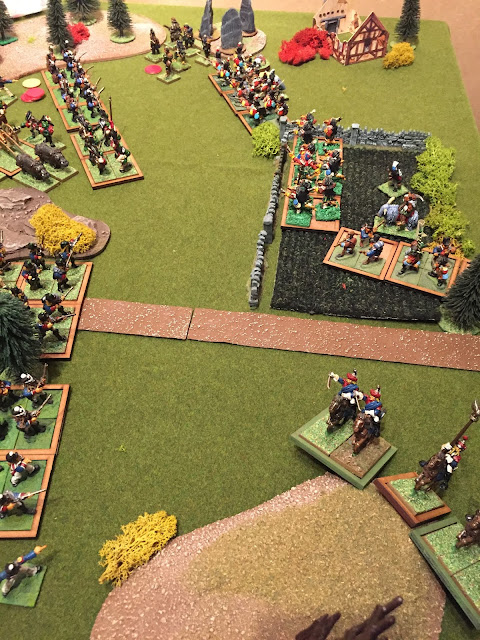 Although the Ferach effort thus far had not left them positionally weak, all of their main fighting units were shaken and vulnerable to more fire. Meanwhile the Joccians and Goblins in the field were still fresh. As such, further melee would no doubt have been disastrous for the Elves.

But then it all started to crumble.  The Elves on the left were forced to withdraw from enemy fire and the Todoroni militia decided they didn't like being shot at at all and immediately scarpered.

As if to add insult to injury, the Elf C-in-C's second blunder of the game affected the Todoroni cannon and they found themselves marching even closer to the enemy than expected. A recipe for disaster if ever there was one!

And thus the battle drew to a close. Although they had made a reasonably brave effort, the Elves had not managed to thoroughly dislodge the enemy from their defensive positions and were no longer in a state to continue the assault. I certainly learned a lot about attack columns, skirmish screens and the necessity of softening up the enemy a bit more before charging into melee.

Overall it was a thoroughly fun game. I used the rules as written, excluding my errors during play, and only added in minor changes to the statistics for Napoleonic troops where required. I have to say that, as far as I was concerned, it was a perfect blend between the 'whimsey' of the fantastical elements and the 'reality' of Napoleonic warfare.

Some credit is certainly due to the fabulous MC Monkey-Dew (visit his blog here) , whose use of older wargame rules, such as 'Charge!', with the figures from Alternative Armies certainly inspired my own effort, right down to the use sabot bases!

For those wondering, all my MDF bases come from the ever-wonderful Warbases, including the nifty casualty marker bases, which I find indispensable and hugely preferable to counters.


The next steps in this endeavour are twofold. Firstly, paint more figures! I have a lot of unpainted miniatures from the range just waiting to be brought on the table. Dogmen and Werewolf divisions are waiting in the wings, as are some proper Todoroni forces.

Secondly, now my efforts have been successfully rewarded, I want to set about painting the sabots green, paint some more casualty markers and create some disorder counters. As you will see from the photos above, I did my best to remove counters from pictures and there is a massive visual impact on the final one were you can see red and yellow markers scattered around!

Thanks for reading and I hope to bring tales of more adventures in Valon using Black Powder in the not too distant future.