Having rested with Gildor following their previous encounter with the Ringwraiths, Frodo, Sam and Pippin set off to cross the Bucklebury River. Passing through Farmer Maggot's fields they encounter Merry, and the four companions set off for the ferry crossing, eager to be free from the threat of the Black Riders. 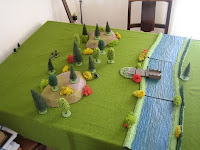 The Hobbits start a way from the crossing, needing to pass through some woods and evade two pursuing Ringwraiths, plus another which is already searching the trees for its prey.

The Nazgul follow the rules for sentries, and are therefore not free to move as they will, represented by a roll on a chart before they move.

A few lucky rolls meant the Hobbits were able to seize the advantage and pass through relatively freely during the early stages of the game. The pursuing Nazgul hardly made it to the forest and the one already there seemed to have decided that lurking behind a bush was a top way to serve the will of the Dark Lord... : 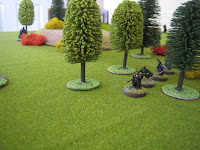 After finishing whatever it was up to in the bushes, the Nazgul resumed its actual task of Hobbit hunting. But the four diminutive chaps were but a stone's throw from the ferry by this point: 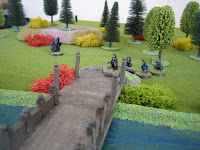 Hurrah! The crossing went off without a hitch, leaving the Nazgul feeling pretty ashamed of themselves: 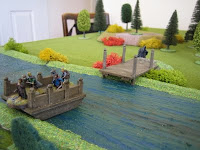 And they are away! Leaving a lone Nazgul screeching in frustration at the end of the jetty and wondering where his mates were in all of this: 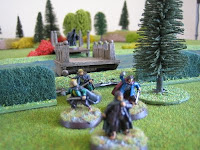 The Hobbits certainly got off lightly. If they had been spotted early on then things could easily have gone the wrong way for them. All in all the game took longer to set up and put away than to play. It was good to tell the story, but I'm looking forward to the more meaty scenarios later on.
Posted by Chris at 14:02 No comments: