Over the last couple of nights I finally got to try the Flashing Steel set of skirmish rules from Ganesha Games. First of all I was going to write a straight battle report, but the rules were so much fun to play I became too engrossed to take notes and photographs properly, so instead this post is a mixture of a) Battle Report, b) Rules review c) Solo potential of the rules.

Battle Report
I rolled up missions from the rulebook for each crew of pirates and ended up with one crew wanting to retrieve a treasure chest and return it to their ship, while the other (under my control) wanted to row out to the island and destroy the cannon protecting the village. 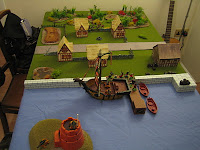 The above is a view of the village and docks. Beyond the village is the encroaching jungle, where the lost treasure is located. At the bottom is the island with the village defences. Two small boats provide the means of reaching the island. Unfortunately, both pirate crews find the other between them and their objective!

At this point I want to mention that the tower, rowing boats and dock still need work. The dock and walls at this point are just card and marker pen. I'm going to print out some decent WorldWorks terrain (Skull Island) to replace them. 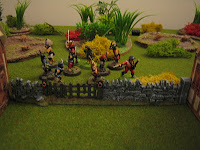 The treasure hungry mob debark from their vessel: 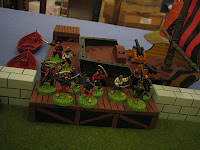 A shot of the game about half way through. 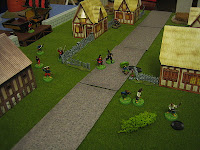 Most of my guys were still cowering near their starting position, except for a couple visible in the background who were trying to sneak round their enemies. The scurvy dog in the turban behind the wall ended up being the 'man of the match'. His skill with the musket killed several of my crew, including my captain, which effectively brought the game to an end as my mob scarpered.

Neither side ended up fulfilling their objective during the game, but the crew which actually had members on the table would no doubt be able to achieve their goal with no further hindrance!

It has been a while since I have played a good pirate game. Legends of the High Seas has been fun, but not as good as I hoped. This is a shame as I love the rules upon which it is based (GWs The Lord of the Rings), but in transition changes were made which I believe left the rules worse off.

So I wasn't sure what to expect from these rules. As with Legends of the High Seas, they are based on a set of fantasy rules (Song of Blades and Heros), modified for pirates, so that didn't bode well in my experience. But I had read many good things about them and playing a Star Wars conversion of SoBaH which a friend of mine put together was very good fun indeed, so I thought I'd give them a shot.

And I am so pleased I did! At the core of the game lies the activation mechanic. The player whose turn it is chooses a character and decides how many actions he wants to attempt, between 1 and 3, and rolls that many d6. Each die that rolls the character's Quality rating or higher allows an action to be performed. However, if the character rolls 2 or 3 failures, then the player's turn is over.

This simple mechanic really makes the rules stand out. You immediately have a decision to make before you even move or shoot with your figure and need to weigh up whether or not it is worth pushing your luck for an extra action or two or if you want to just try for a single action and play it safe. But it soon becomes apparent that, although you can roll for one action and try to activate all your figures without risk of ending your turn early, this tactic just ends up giving your opponent a ticket to walk all over you!

Each character in the game has two core stats, Quality, which I have mentioned above, and Combat, which is added to a die roll with modifiers and compared to your opponent's roll to determine the outcome. In this lies shades of DBA as you usually need to double your opponent's roll to score a kill, merely beating it results in the enemy being knocked down or pushed back. But again, it is an elegant mechanic which covers a range of outcomes in a simple roll.

Extra life is brought to the game by the large range of skills and abilities characters can have. Almost any kind of swashbuckling hero (or villain) can be created with these, and they allow for a great deal of flavour in games without bogging down the core rules. I tend to restrict many of these to 'hero' types, but that is entirely at the player's discretion. The rules include a points system to allow the creation of whatever kind of force you desire. Also of interest is the mini-campaign system, designed to allow a narrative style campaign to be played in one evening, and the useful scenario generator, which I have found to be very handy in prompting creativity.

It is worth mentioning that these rules can be bought as a PDF for a single digit dollar sum, making them some of the best value rules currently available. But most importantly, they are just downright fun to play. The elements come together to provide quick playing skirmishes which really leave you wanting another game. In fact before I sat down to write this I had to set up the table to see if my battered crew could get their revenge and steal the other crew's treasure before they got it back to the boat.

In many ways this short piece is not doing the rules full justice, but I really want to move onto the next section:

Much of my gaming is done solo, so I like to look out for rules which give a good game in this respect. Or at least offer it as an opportunity. Surprisingly enough, I find myself thinking that the system Flashing Steel and most of Ganesha Games' other rules are based on could be my holy grail in this regard.

This blog entry looks at a simple method to allow the activation rolls to be randomised and it works very well indeed. I have used it for both solo play and suggested it as a method of activating a third force in the two-player Star Wars variant my friend came up with. In both cases it works very well indeed. I very much encourage you to click the link at the start of this paragraph to read more about it.

With the activation rolls taken care of, I just needed a way to determine what characters do with their actions. Wanting to keep things simple I devised a chart which the characters would make a 3d6 quality roll on, the number of successes determining whether they acted to complete their mission or got sidetracked by fighting my crew. I actually used two tables for this, one for 'henchmen' types and one for 'main characters'. I decided before hand that the main crew had been ordered to retrieve the treasure, while the captain and his senior crew would be more focused on fighting me and stopping my crew from achieving their objective.

This worked very well indeed, with little decision making during the enemy turn required on my part, but also resulting in a challenging and interesting game to play. The fact that I got a firm beating from my 'A.I.' confirmed to me that this was an idea worth pursuing. I really did feel like I was playing an automated opponent instead of playing both sides myself. It also felt like I was using a method which was an extension of the existing system rather than trying to force some solo rules onto a game which didn't like them.

I'm going to leave it there for the time being, but I am surely going to post more entries about these rules. I would greatly encourage you to buy the PDF (or hard copy) and try them for yourself, whether you want some fun skirmish rules or are looking for a set easily adaptable to solo play.