I was hoping to bring you a Comic Life AAR to acompany the recent Patrol Angis report I posted, but unfortunately I am having ongoing technical issues with the software which is preventing me from completing this. So, in the meantime, I thought I would give you a brief review of what you get when you order the painted version of the Patrol Angis Starter.

The starter comes with two complete sides for playing the three scenarios included in the rule book. As well as the figures, you get the rules, the monthly freebie miniature and an additional Patrol Angis Sculpt. The additional PA figure also come painted, but the freebie miniature does not (understandably).

So let's take a look at the sides. The Yordan side, painted in green, consists of a weapon platform, a Post (i.e. squad) of Retained Knights and 3 battle armour suits. Here are some pics:

Here is a close up of one of the suits (just to prove that sometimes I can focus my cheap, old camera!) 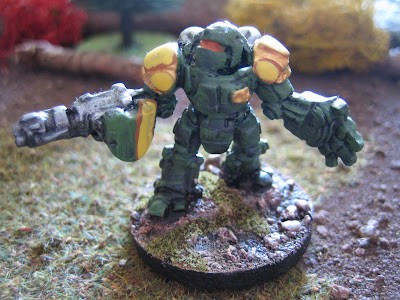 I really like the green/yellow paint scheme on these guys and the folks at the Ion Age don't scrimp on the basing either.

The other force comes from the Prydian army and is comprised of two posts of Retained Knights and a command squad:

Again, I really like the paint scheme and basing. The figures are all painted with artist acrylics (available from The Ion Age here) and the results have made me consider swapping to them as well as it works out much more cost effective than normal model paints.

This is the first time I have got figures that have been pro-painted in this way, and I am rather impressed. If I were to aim for a similar standard, either I would fail to achieve it, or it would take me so long that I'd give up. So in that regard they are excellent!

Here's a picture of the extra figure you get when you buy the set: 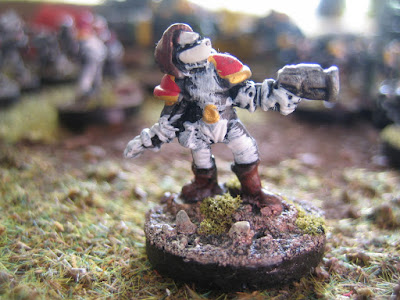 To finish off, here is an 'action shot' of all the figures: 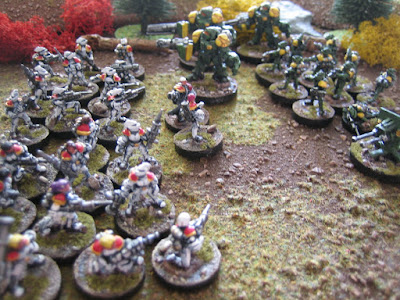 The pictures probably tell you more than words can, so I'll just reiterate that I am very pleased with them!

I should also mention that, as presented, the Female Retained Knights are usually painted in Yordan colours. As I prefer to mix up the male and female characters, I asked if they could be painted as Prydians so I had the two squads to play around with and the request was handled no problem. How accommodating of the chaps at The Ion Age!

If you are interested in buying painted figures, then you should check out the Ion Age site. As it is the same company as 15mm.co.uk and Alternative Armies, you can check out painted options from those sites as well. 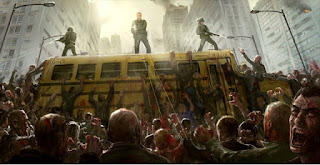 What, but it is only September?! Yes, but we are right at the end of it, which means Zomtober is only a few days away. As such, I thought it better to plan for some frantic painting. I've got a fair bit of zombie related lead in my pile so I've drawn up a list of some key things that could do with sorting out.

I've wanted to paint some of these for a while, as there is a certain appeal in attempts to catch zombies rather than blow them away! Or is that just me?!

These have plenty of utility in 'early days' scenarios when crowds of civilians are getting out of control. And later, when order needs to be maintained in the'safe' zones.

I have a woeful lack of military types available for my games. Something that would be good to sort out as automatic weapons are always the best solution to a zombie problem. Not.

Time is really at a premium at the moment, but I'll try and paint what I can and get at least one game report done for Halloween.
Posted by Chris at 14:32 2 comments: