My wife and I are soon going to be moving to a new house. This is excellent as we've been stuck in a 'merely adequate and even then not always' flat for the past four years. But it also means the blog will be shut down for the next couple of months as what would usually be painting and gaming time becomes packing time...

If anyone has any great ideas about how to safely move box loads of miniatures and terrain, please feel free to share. At the moment my plan merely consists of shoving bubble wrap around things, putting the box files in moving boxes and then hoping for the best...

And don't even get me started on the amount of junk I've accumulated. All those scraps of card, bits of plastic, articles torn from magazines and various bits and bobs which 'might come in handy'. Argh!

The move should be taking place sometime in September, probably towards the end of the month, so I expect to be in a position to post again in October. I'll have to plan something special!

Thanks all for reading and commenting on my blog. See you again soon!
Posted by Chris at 17:00 9 comments:

I managed to finish my 4 point Norman warband for Saga last week. It was all ready for a game with Mr M at the club on Thursday, but I was struck down by a migraine and had to stay at home instead. Very disappointing, especially as it turned out Mr M was going to surprise me with a Scot warband I hadn't played against before! Still, there will be other times.

So here is a picture of my boys arrayed for battle:


My chosen 4 points consists of 8 warriors with crossbows and 12 mounted knights. The knights I plan to use in two units of 6 to combine versatility with striking power. Ever since the first time I tried that with my Vikings I have always been ready to sacrifice a saga die for fewer, but larger, elite units.

So with the Normans ready, I set up a test game against my Vikings. 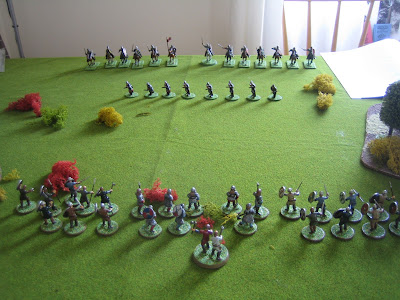 The idea was to test a combined arms approach with the Normans. The crossbows would fire on the Vikings as they advanced and then retreat back, allowing the knights to charge a weakened foe.

The Vikings were to use their standard tactic of "CHARGE!"

Of course, it didn't quite work out like this...

The Normans got some poor dice, so could not use their better shooting abilities. In addition, they were out of range of the Vikings. So they opted to move the warriors forward, fire and then move back again. The extra dice were used to boost their attack dice. Unfortunately the general had deployed too far back to give them the benefit of his free activation.

The Normans only managed to inflict a single casualty on the Vikings. What's more, when I look at the picture again I see the crossbows are missing a fatigue. The shoot have two as they moved, shot and moved again.

I mulled over the Viking turn for longer than usual. I was toying with hurling the hearthguard the length of the board, but then they would have no abilities to use in the melee and I also saw the distance was far enough that the Normans could probably use their fatigue gained through movement to slow them enough to prevent contact! So I opted for a surprisingly restrained first turn moving them forward in a steady line, while keeping a couple of abilities back to use against Norman shooting and an unlikely early charge.

Slightly better, but not a lot. I managed to get the two dice I needed for a 'fatigue-free' shooting. But the extra volume of fire did little. It was at this point that I started to wonder if I should have kept the knights in smaller units as I would have been happy to roll more dice to try and get the rather tricky to roll shooting abilities...

This was when it all kicked off. The heathguard rumbled forward and used a free activation form the warlord. They managed to roll enough dice for the 'Activation Pool' ability to get 7 on the board when they were done. 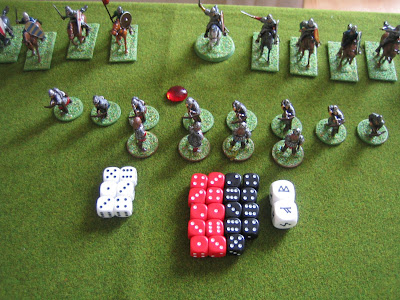 So, due to their dispersed formation, two of the Norman crossbowmen were not able to contribute to the melee. I did have some kind of idea they were shielding the knights, but to be honest that was a bit stupid of me... So the white dice on the left were what the Normans had to roll. Needing 4+ (Normally 5+ but a viking ability reduced their own armour).

The Vikings on the other hand started with two dice each for being hearthguard (the red ones). You'll notice there are only 4 figures, but I had removed one to power the Valhalla ability by the time I took this picture.The black dice are what they gained from their abilities. 19 in total. And they only needed 2+ to hit. Normally 4+ but crossbowmen lose a point of armour and the Vikings also spent the Norman fatigue marker to reduce it again. The two saga dice pictured are to remind me that the Vikings could also re-roll all their misses (again from an ability)!

So no surprises in the next picture...:

In fairness to them, I think the Normans gave a good account of themselves by taking out two of the Viking hearthguard!

It was at this point I noticed a significant tactical error... Just out of shot at the bottom of the above picture was the Viking warlord. He had advanced with the hearthguard and was now sitting by himself within 12 inches of the mounted Norman warlord. So, if activated, the Norman leader had no option but to charge his foe. But of course, he could take his pals with him...

So the inevitable happened and the Normans rode into battle and trampled the Viking warlord, thereby winning the scenario. It was a bit of a letdown when you make a mistake like this in an actual game, but it also reminded me how fast the Normans can be.


So what did I learn from this? Well, I think I might want to consider returning the hearthguard to 3 units of 4 and see how it affects the dice I get to use. I also really want to get some bowmen levies as they have access to an ability which lets them fire at double range, something the crossbows can't do. I still like the idea of massed fire with my Normans.

So with that in mind I think I want to set the game up for another go!

Happened to be in London today with the wife and found a few moments around doing the essentials of the visit to pop into a couple of places. As we were looking for Forbidden Planet (I chose an unusal direction for our approach!) we came across the now in administration ModelZone. That was god as I managed to pick up a couple of paints at 30% off. Worth a trip if you are around there.

I also popped into Orcs Nest (as you have to do) and found they were selling Army Painter basing materials at £2.99 a tub, vs the £4.27 on the Army Painter website. Don't know how much of a bargain that was compared to other retailers, but it was good enough for me...

I also spend much of the train journey down ordering free samples of artifical grass thanks to this post on TMP. I think I ordered from 5 or 6 companies, so it will be interesting to see the results in a few days!
Posted by Chris at 21:20 No comments:

Why I love ATZ

I love All Things Zombie. I just want to be clear on that...

Let me explain the above picture...

I decided to take The Mad Axeman out on his first trip. Nothing too strenuous. All he was planning on doing was clearing a rural area of a few zombies and claiming a farmhouse as a base of operations. Simple stuff really.

Set up: Only two zombies, placed 12cm away. 3 potential encounters placed behind cover at various points. With an Area Encounter Rating of 1 they would probably be nothing to worry about.

Turn 1: Zombies activate and move 6cm towards The Mad Axeman. He has failed his activation roll and apparently doesn't notice the threat.

Turn 2: Okay, slightly worried now. The Mad Axeman failed his activation roll again but the zombies didn't. That meant they could charge into combat. The charge rolls were not too great. No problem at the front, but the penalty for being charged from the rear meant the Axeman counted as unarmed against one attacker. Very luckily, the Axeman was able to knockdown both his opponents, although he didn't kill either.

Start of  Turn 3: Of all the things that could happen I roll a double 1. This was the only roll which could cause a random event in a rural area (i.e equal to or less than the Encounter Rating). The event roll results in a barking dog (clearly from the farm) run up to the Axeman, pursued by 4 more zombies (the other ones in the above picture).

Now to reroll the inititive dice and hope the Axeman can retreat!

But first I just had to write a quick blog post... This game is nuts and really throws up some interesting situations when you least expect it!


UPDATE: Well, The Madaxman escaped the zombies. But he also twisted his ankle. He encountered a solitary civilian who emerged from the woods but clearly couldn't decide if she wanted to approach an axe wielding man dressed all in black. Finally something happened in the farmhouse which caused it to catch fire, rendering the whole reclamation of it as a base of operations pointless.

Got to love how the narrative creates itself during play!