A few days ago I bought 6 'HO Scale' buildings on eBay for a little under £6. Not bad. But when I unpacked them, I found that 2 were clearly smaller than the others and really didn't work with my 15mm. Now, I have no knowledge of HO scale except that I have read it can vary widely and, for the price I paid, I am happy I got 4 usable buildings.

The purpose of this post is to show the buildings next to some figures and invite some discussion on the subject of using HO scale for 15mm.

First up, the church. This, along with the following house, look wooden and handmade, which surprised me as I expected them all to be plastic. I quite like how it looks. a sticker underneath identifies it as by "Vau-Pe" and having been "Made in Western Germany". I don't know if this is being used synonymously with "West Germany" and just suffering slightly in translation but, if so, it seems to be quite old! Note the spire/bell tower is not in the picture as I was mainly trying to show the scale with the figures. 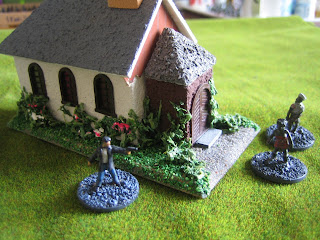 The second building is a house in the same style of construction as the church. This is by RS and has an ink stamp underneath clearly stating it was "Made in West Germany". 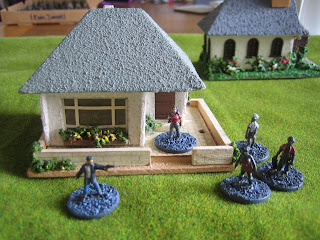 Next up is a 'building under construction' made out of plastic. I have seen this advertised elsewhere. I like this as a variation on all the fully built buildings I'd normally have on the table. 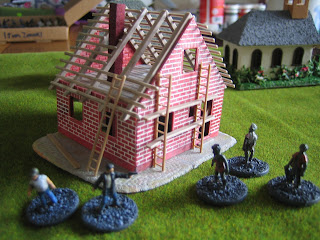 Again, based on the size of the door/windows, this one works okay with 15mm figures.

Last from the 'good batch', a smaller plastic house. 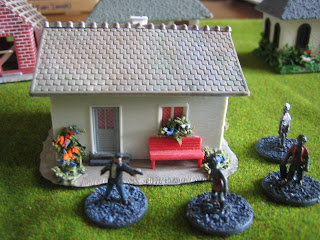 Again, it seems to scale well with my figures and will be useful for games in rural areas. Of course, most of these buildings are 'European' rather than 'American', but such things will not stop me from using them for my zombie games.

Now the difficulties begin. This was actually the first building I opened and it made me fear the worst for the whole lot before I saw them: 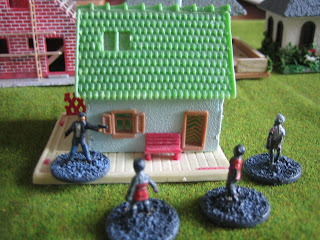 Aside from looking like it came out of a Kinder egg, it is clear that no one 15mm in height would be able to fit through that front door!

The last one looks like a kind of Alpine barn I have seen in Europe, but is also woefully small: 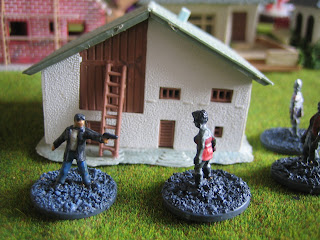 I am very interested in hearing if other 15mm gamers use HO scale buildings and what their experiences have been. I have a feeling that the smaller two are actually of a different scale and were described incorrectly by the seller but, having read about the amount of variation and not having any real knowledge of the scale, I don't feel sure about it.

Ideally, I'd like to gain a clearer idea in my mind about what an HO scale building 'should' look like. If they are generally like the first four, than I will be keeping an eye out for more eBay bargains.
Posted by Chris at 15:36 11 comments: