A Look At: War in Catalucia

This is the first in what I hope will be a complete series of overviews of the Flintloque books. They will examine the content and presentation of each, but will stop short of being a full review as I have yet to have the opportunity to play a proper game. Also, this game has taken my fancy enough that I am not overly objective at present. So label this post 'biased opinion' rather than 'review', and enjoy!

War in Catalucia is the first in the series of the 3rd Edition Flintloque rulebooks (more information can be found on the Alternative Armies website here. It is available either by itself or as part of a starter box set containing all you need for a small game. My last two Flintloque tagged posts are of the opposing sections presented in the box set, so check them out if you want to see the figures.

The book is a softcover 96 page affair, with black and white content (except for a few pages of photos and the cover) on glossy paper. I confess to being pleasantly surprised by how it looked. My previous experience with publications by AA or their affiliated companies was a small booklet from the USEME series. Not that it is any way fair to compare a £3.50 pocket sized rulebook to a more costly publication, but Flintloque appears to be where the printing budget is concentrated!

On the inside of the front cover is a map of the Flintloque world, which I was initially confused by, expecting something more 'European' looking like the Warhammer world. This is clearly a cunning ploy to draw you into the setting as I proceeded to spend several minutes spotting all the countries and seeing what changes had been made from the real world!

Following the contents is an introduction to miniatures gaming which is nice and concise. It doesn't drag on, but gives a good overview. You may start to notice from the pictures that the font size is small and the pages generously filled with text, giving this publication a word-count heft equal to some larger titles. In fact so much is crammed in that I have yet to read all of it in full detail. There is much to savour here!

The first main section of the book details the background to the setting, the war and its opposing forces. There is a lot of detail here, but it is interesting to read even if you don't believe that 'fluff is king'. Cleverly, it is this section of the book that is broken up by 'scenario seeds', so you can dip in and out, reading some background and playing games associated with it, or just using the wealth of ideas as your own inspiration. I think that, if this was a generic fantasy setting I would not be bothered by the fluff but, if you are going to bother making a Napoleonic style fantasy game, you may as well produce some interesting background to go with it, something found in abundance here. 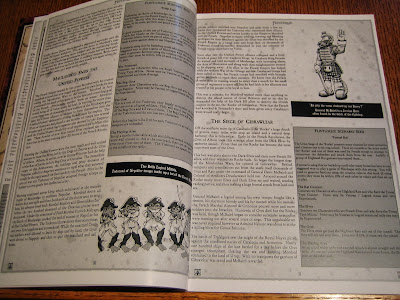 Above is an example of the background pages. As you can see, the pages are divided between some fun artwork, sections of 'historical' information and scenarios (in the grey boxes). Plenty of interest just for browsing through, but I promise, you will end up reading more of it than you might expect! 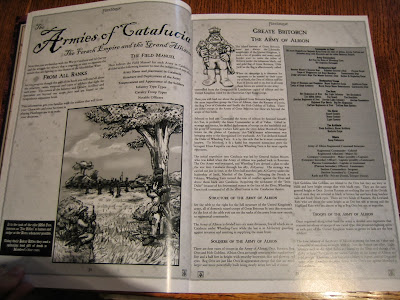 The next big section covers the armies of the various nations, their structure and any special characters. Again, because of the font size and the densely packed text, each one feels like a mini army book in its own right. Plenty of inspiration to be had here. This volume covers the main armies which fought in Catalucia (the equivalent to the Peninsular campaign), so you get the Elves (French), Orcs (English) and Goblins (Portugese) as well as Dark Elves (Spanish), Toadmen (Italians) and much more besides. The war in the Witchlands (Russia) and  what stands in for central Europe are covered in additional, stand alone volumes. 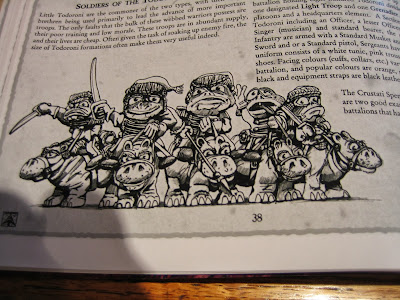 I love the artwork dotted throughout the book. Like the Flintloque figures it has a lot of character and there is always something to find that will make you smile (or more likely think about what army you want to collect next...). I picked this one mainly because... well... it's toad men... on baby hippos... You can't go wrong with that! The art certainly has an old school feel to it, very much in keeping with the tone and feel of the game itself. 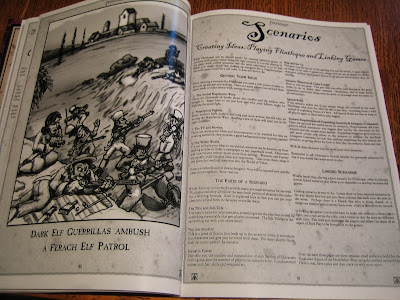 Following this is the scenario section, giving three fully fleshed out scenario ideas and suggestions for making your own. These are interesting to read and I will probably play a couple of them. Together with the other scenario ideas in the earlier section you have plenty to inspire and help you along, especially if you feel that words like 'Napoleonic Wars' and 'skirmish games' don't fit so well together! 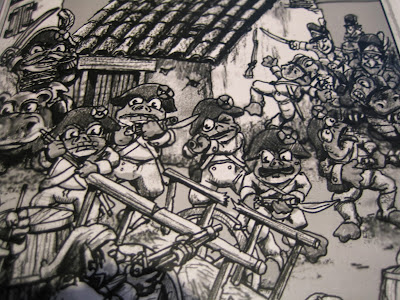 This is a detail from one of the full page pieces of art. They are so much fun, and this particular one features my favourite Todoroni (although I am miffed that one is getting eaten head first by a darkelf's lizard mount). I definitely want to recreate this scene as a scenario some time... 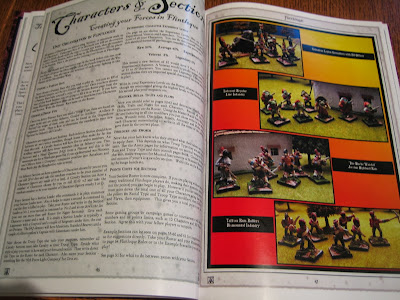 The book then moves on to such matters as character and section creation and continuing your sections between games to form a campaign. The character creation section details how to define your troops' stats and covers various skills, traits and flaws available to the various races as well as how to form them into sections. You'll see from the picture that this is also where some colour photos of figures from the range have been inserted. A nice addition and again, the right number of pages given over to such material in my opinion. 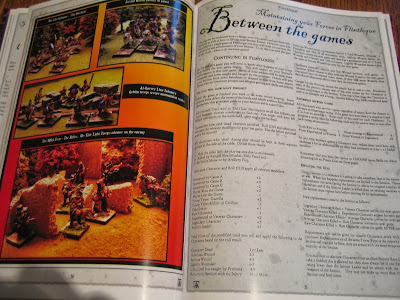 The 'Between the games' section describes how your characters gain experience and improve between sessions, as well as how to determine if the casualties in the game survive to fight again. This is similar to other skirmish games but is not as complex as some of them and I think this will prove to be an advantage as you can focus on playing games instead of lots of book keeping, but still feel you are developing a unique group of individuals. 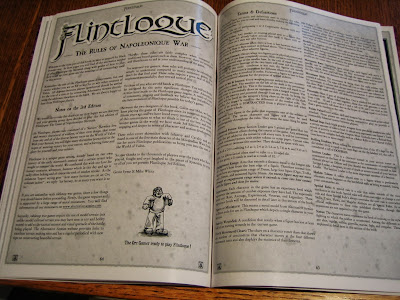 The final section of the rules is just that, the rules. Not having played them, I won't dwell too much, suffice to say that, from several read-throughs, they look simple yet effective. The core mechanisms are based around percentile dice and it is a system where players take it in turns to activate two of their figures and perform actions with them. But don't take my word for it, the rules in the book are essentially the same as the Flintloque Lite version available from Alternative Armies, so drop them an email and have a read of your own PDF copy! 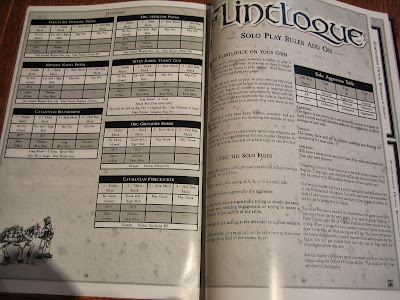 Following the pages of charts and tables covering the stats of the different soldiers and weapons, you find what, for me at least, is one of the highlights of the system. The solo play rules allow one side to be automated by the game mechanics and look like an interesting way to control a third force in two-player or even co-op games maybe. I'm really looking forward to trying these out. The enemy is assigned an 'Aggression' category and then a chit pull system determines what each figure will do when they activate, so you can't be certain how they will respond to you. It looks quite promising and, if I like it enough, I will probably try and use a variation with other skirmish rules that don't come with a solo option. 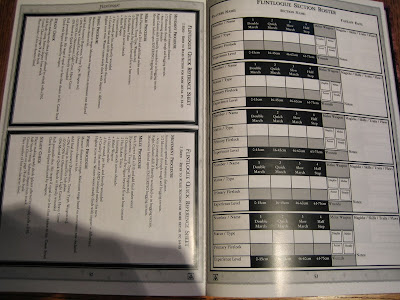 The last few pages contain force rosters, quick reference sheets and counters, all of which look functional and I will definitely copy and laminate the quick reference cards for use in my games. They are perforated, but I can't see myself pulling pages out of my books.


So, that about covers everything. I have really enjoyed reading this book and it has got me very excited about playing this game. It definitely has some oldschool charm about it and it very much reminds me of the older Games Workshop stuff that I enjoy. In fact, I have enjoyed the book and figures so much that it took a while to sink in that I have basically got sucked into a fantasy game where the rule publisher is the sole supplier of figures usable in the setting! But when the company boss takes time to personally respond to emails and clearly loves the games he sells, I think I can live with that. It makes me think of the best kind of games from the late 80's and early 90's in that way. Like a little lighthouse of gaming history in a storm of overly polished, commercialised waffle.

All in all I am very satisfied with this book. I definitely think it is worth the money and it is comprehensive without feeling too slick and over-produced. It has a nice retro feel to it, but it is also clear from reading other websites that the 3rd edition is an improvement on older versions of the rules. At the moment I can't find a great deal to criticise about it, but as I do feel the need to offer something up for the sake of balance, I have to say that there are too many typos and grammatical errors for my liking. Some are jarring but most can be overlooked.

Oh... and as a strange side effect it has got me more interested in reading about the Napoleonic era and the armies of the time, even though it is a fantasy game, but then again I am always interested in history, even if I don't usually game certain periods.

So in conclusion, I'm pleased I finally decided to check this game out and find the book to be an excellent read and worthwhile purchase. On the basis of my experience so far, I would recommend others to take a look too!