A bit of a random post this time. Recently I have had a fair bit of time to do what I should probably have done years ago, and have a good root through some of the things I left at my parents' house when I moved out, with a view to deciding what is worth keeping and what I can do with out.

As part of this process, I stumbled across some a small set of sci-fi rules, conveniently entitled: Sci-Fi Rules. Nothing quite like something saying what it does on the tin... What's more, the Alien on the front cover add to the reader's understanding of what he or she is getting, even before the cover is turned!

Strangely enough, there is no author or publisher information available anywhere in the book, but fear not, all will soon be revealed! Ah, okay then, I'll tell you now... To the best of my knowledge, these are a set of rules published by Warrior Miniatures to accompany their 10mm sci-fi range. The only reason I know this is that, about 15 years ago, I recall buying some of their figures and I am pretty sure I got a set of rules to go with them. Now, I could be wrong, but given they list a set of rules with the range of figures, I'm willing to bet that this is them. Even more so when I see they are listed for the princely sum of £1.50.

£1.50??!! Yes, that is correct. One pound and fifty pence. But before we get too excited, a few things to bear in mind. The production quality is, errrm, let's call it 'quaint'. They could have been produced in the 70s. But I quite like them! Check out the staples holding them together! Secondly they are written in a 'typewriter' font, with some hand drawn tables for good measure. Thirdly, they are only 8 pages long (although they feel deceptively large as they are only printed single sided. And in case you are wondering, they are pretty much A5 size. So they basically fit on 4 sides of A4.

Here's a picture of the first page. I won't show any more as if I show you a second page I'd have just reproduced 25% of the whole book.... 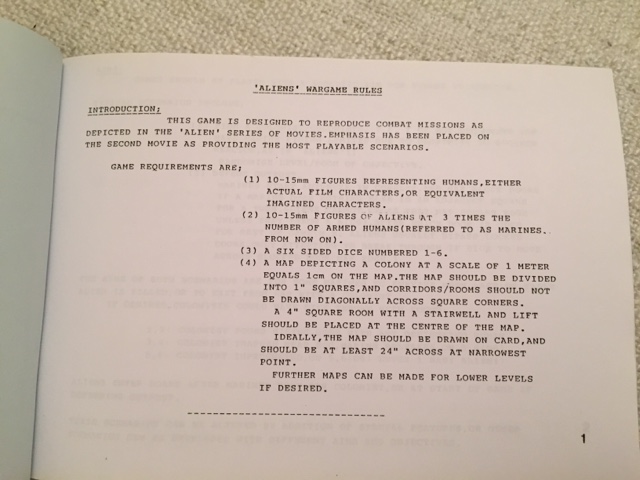 But on the plus side, whereas I might break down a review into sections based upon each chapter of some rules, here I can review each page! Let's do it!

Page 1: Pictured above, this gives the background and what is needed to play. Basically it is a simple recreation of an Aliens type scenario. Interestingly, it opts to scale the map at 1cm = 1m, but then overlay it with a 1 inch grid. Nothing like mixing imperial and metric measurements! I'm also not entirely sure where I would get a map of that scale to overlay with a inch grid in the first place... So ultimately, just do your own thing is what I'd suggest...

Page 2: This suggests a couple of objectives for the humans, such as locating colonists or defending an outpost. The rules to govern objectives are pretty loose. For example, under the 'Find a colonist' scenario, it merely says 'randomise level/room of objective.' So again, plenty of scope for adding more detail as desired! In fairness, the second half of the page does give an optional rule for rolling to see if the colonist is okay or impregnated by an alien, but the whole page seems unsure whether there is one colonist to be found or more, or exactly how you determine if they have been found.

Page 3: Outlines the order of play. Which is that Marines move and fire, then Aliens dice for their movement. Human organisation is also mentioned here. Marines are divided into fire teams of between 3 and 6 marines, one of  whom is equipped with a flame thrower or heavy weapon. It also says that a command section 'can' be used, but given the bottom of the page describes how orders can be issued to fire teams under an officer's command, I'd say it was pretty important! It doesn't say what happens if all officers are killed though! What is interesting about these rules is the order system. Orders are issued at the start of a turn and then you roll to see what effect they have. Which brings me nicely to...

Page 4: Possibly my favourite page in the book! This page outlines what the 5 order types are and what might happen when they are issued. Basically they are: 'move toward objective', 'move towards the command section', 'disperse', 'fall back' and 'retreat to the exit'. They are given more interesting titles than that though. But what I really like is that, once an order is issued, you roll a d6 to see if it is followed. Most have a 50% chance of being followed, a 1 in 3 chance of being followed but not as effectively and a 1 in 6 chance of not being followed at all. This actually is an interesting approach and I'd be tempted to use something similar for other games, especially when human soldiers are facing a particularly brown-trouser inducing foe.

Page 5: This page introduces the Aliens. You roll to see how many are encountered, which is either 1x, 2x or 3x the number of Marines... This seems to make for quite varying difficulty so I'd probably stick with the 3x option! Aliens are placed randomly on squares at the edge of the map and this makes me think a smaller map might make for a more interesting game as there will be less option for the Marines to pick off the Aliens as random movement disperses the pack. On the other hand, Aliens have entirely free movement, unhindered by doors and walls, so the Marines may well be lucky to get many shots in before the Aliens are on top of them! Alien movement is determined by a d6 roll. The most likely (33%) result being a move directly toward the nearest marine and the others resulting in movement in other directions (never away), so there is the possibility of being outflanked.

Page 6: This page outlines shooting. Interestingly, it suggests you need a 1cm gap between friends to shoot between them. So although movement is on a grid, placement within the square has some importance. Although perhaps it is just a typo or a hang over from a previous version of the rules? Oddly, an assault rifle shoots 2 squares, giving it a whopping 5 meter range at the ground scale. And you remember the kick ass heavy weapons from the movie? Well they can blast aliens at a distance of 7.5 meters! I think it is probably best to either ignore the ground scale, or adjust the maps and ranges to something the player feels is right. A table gives a d6 score to hit depending on range and weapon used. The shooting section also mentions that Marines are placed to face the side of a square when firing. Now this has an impact on close combat, but I'd have thought it might be best decided during movement. But there you go.

Page 8: For a very simple set of rules, Page 8 is dedicated to special rules, including stairs, lifts, the Alien queen, facehuggers and vehicles. As you might expect, none of these are covered in huge detail, but there is enough to go on.

Well, there you have it! A review of every page! I actually find these rules quite fascinating... They have a few good ideas and are suitably simple for a fun game. On the other hand, they are in pretty significant need of clarification and polishing, or perhaps just more rigorous playtesting. I kind of get the impression that they might have been written with a participation game at a convention in mind, one run by a GM who can adjudicate situations as and when they arise. Ultimately I think you will struggle to find a better set of rules for £1.50, but I would love to clean them up and rework parts of them.

As it is, I'm happy I own them and will probably play them in some form as a simple Alien skirmish. I really like the idea of the how Marines are ordered and how Aliens can use air ducts to avoid having to move normally like the humans do (just like the film). I imagine having Aliens moving closer to you while to try to dash to a larger room so you can get a good shot in would create quite a few tense moments.

I've been a bit in limbo over the past few months. We have moved down south, but it probably will be at least another month before we move into our new house. So rather than any actual painting and gaming, I've been trying to come up with a plan for the year.

What I've decided upon is to have a monthly focus. At the beginning of each month I will randomly pick one of my projects. Then I will paint something for it, perhaps a new regiment or character, and then play a game or two. This should  be enough for my flitting attention to deal with, while knowing that in a few weeks I will be doing something fresh and new. 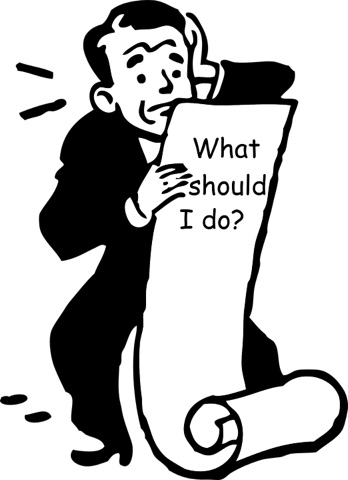 So, plan decided, what projects will be part of it? I'm thinking the following:

Notable exceptions are Star Wars, because most of my figures are pre-painted for this, and my 15mm Warhammer Fantasy project, because that is a big enough thing to have its own blog.

Of course, my list might change as time goes by, I might add toand remove from what is 'in the hat' and I've got more than enough projects for one a month! But we shall see how it all pans out and hopefully it will make for some varied reading on my blog this year. Fingers crossed.
Posted by Chris at 19:08 3 comments: